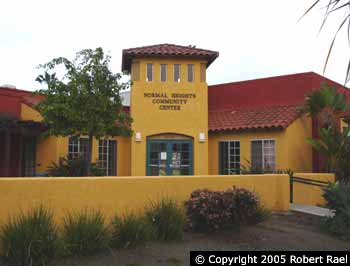 he Normal Heights Community Center located on 4649 Hawley Blvd. can be rented by individuals and community groups. Please call 619-282-7329 for more information.

The following text is the Resolution of the City Council in the City of San Diego, receiving the generous donation of the Community Center.

Resolution of the City Council City of San Diego

WHEREAS, The Oniera Club was founded in 1919 as an organization of women from Normal Heights, Kensington and Talmadge, interested in the welfare of the less fortunate, and,

WHEREAS, The Oniera Club is the oldest and most distinguished service club in the Adams Avenue area, and,

WHEREAS, the Club’s first major project was to roll bandages to help the World War I effort, and,

WHEREAS, that activity was a forerunner for numerous other community projects such as raising money for homes for the aged, blind and mentally retarded; creating scholarships and aiding veterans in many ways including tree trimming and Holiday parties at the Downtown YMCA, and,

WHEREAS, among other things, the Oniera Club has had a garden club, an orchestra, music club, glee club, an arts group, drama club, civic and English department and worked on historical matters in the San Diego area, and,

WHEREAS, the original group of women purchased land in Normal Heights in 1919 and their husbands built the first building on that lot, and,

WHEREAS, in 1952, the present, larger structure was built adding special significance to the Club’s motto: “Dreams Come True,”

THEREFORE, BE IT RESOLVED, by the City Council of the City of San Diego, that they recognize sixty-six years of service by The Oniera Club to their community and their unselfish commitment to improving the lives of the less fortunate.

BE IT FURTHER RESOLVED, that the City Council, on behalf of the people of San Diego, gratefully accepts the generous gift of The Oniera Club of their building and properties for the betterment of their community. This action is a true example of the Oniera Club’s spirit of giving, spanning its entire sixty-six year history.

Signed by: Roger Hedgecock, then Mayor of San Diego and 8 other councilmembers.

We use cookies on our website to give you the most relevant experience by remembering your preferences and repeat visits. By clicking “Accept All”, you consent to the use of ALL the cookies. However, you may visit "Cookie Settings" to provide a controlled consent.
Cookie SettingsAccept All
Manage consent

This website uses cookies to improve your experience while you navigate through the website. Out of these, the cookies that are categorized as necessary are stored on your browser as they are essential for the working of basic functionalities of the website. We also use third-party cookies that help us analyze and understand how you use this website. These cookies will be stored in your browser only with your consent. You also have the option to opt-out of these cookies. But opting out of some of these cookies may affect your browsing experience.
Necessary Always Enabled
Necessary cookies are absolutely essential for the website to function properly. This category only includes cookies that ensures basic functionalities and security features of the website. These cookies do not store any personal information.
Non-necessary
Any cookies that may not be particularly necessary for the website to function and is used specifically to collect user personal data via analytics, ads, other embedded contents are termed as non-necessary cookies. It is mandatory to procure user consent prior to running these cookies on your website.
SAVE & ACCEPT